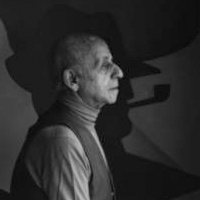 Richard Lindner was a German-born Jewish painter who grew up in Nuremberg. He studied music in his youth and was poised to become a concert pianist; however, Lindner’s interest in art led him to the Kunstakademie in Munich, where he studied from 1925 until 1927. In 1929, he became the art director at Knorr & Hirth, a large publishing house, where he worked until 1933 when he fled to Paris to avoid arrest by the Nazis. In France, Lindner continued to work in graphic design until 1939. He moved to New York in 1941 and worked as an illustrator for numerous publications, including Vogue, Harper’s Bazaar, and Fortune.