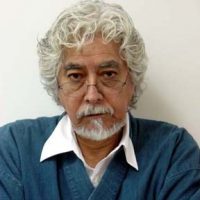 Graham was born in Mexico City, Mexico. After the early death of his father, he moved with his mother, his grandmother, and an aunt to San Jose, where he began his formal training at San Jose State University. He continued his studies at the San Francisco Art Institute in California, finishing in 1964. Within five years he had one-man exhibitions of his sculpture at important contemporary art galleries in Palo Alto, Los Angeles, New York City, London, Cologne, and Essen, Germany. He lived in London for a period before settling in Los Angeles in the early 1970s. His first solo exhibition in a museum was at the Dallas Museum of Art in 1972. Since then he has had dozens of one-man shows, including several at the Los Angeles County Museum of Art.

Graham’s first major monumental commission was the ceremonial gateway for the Los Angeles Memorial Coliseum, for the occasion of the 1984 Olympics. He also designed the commemorative silver dollar for the event. The gateway featured two bronze torsos, male and female, modeled on contestants in the games. The gateway was a major design element of an Olympiad noted for its lack of new construction. To the surprise of many, the nudity of the torsos became an issue in the media.

Graham used a range of materials and scales in his work. In the 1970s Graham created very small wax sculptures (circa 4″ – 10 cm), depicting sexual congress. His 1986 monument to the boxer Joe Louis is a 24′ bronze fist and forearm. He has created hundreds of nude figures and groupings in intermediate scales. He also contributed to the FDR Memorial in Washington, DC.

He married actress Anjelica Huston in 1992. California Governor Arnold Schwarzenegger and First Lady Maria Shriver announced on May 28, 2008 that Graham would be inducted into the California Hall of Fame, located at The California Museum for History, Women and the Arts. The induction ceremony took place on December 15, 2008 and he was inducted alongside 11 other legendary Californians.
Graham died 12 days after the ceremony on December 27, 2008.