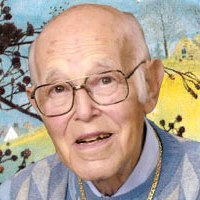 Born in New Jersey, Robert Laessig attended the Textile Design School of Plauen in Germany for five years and specialized in the study and painting of flowers. He was a textile designer until World War II when he served with the 13th Air Force Historical Section as a combat artist. Later, he studied at Art Students’ League in New York City. An opportunity to become an art consultant brought Laessig to Cleveland where he lived for decades.

Laessig has won prizes at the Butler International Art Show in Youngstown OH and also the annual May Show held at the Akron Art Institute. He was presented a distinctive award for the best watercolor in a show and an abstract painting was purchased for the Cleveland Museum of Art at the time of the 1959 Cleveland May Show. He has exhibited at the American Embassy in Norway, designed the official White House Christmas Cards for five years during the Johnson Administration, won the Ohio Watercolor Society Gold Medal and won the Winsor & Newton Award. He also earned the top award in the National Academy of Design Exhibition, National Academy Galleries, New York City. His images are published by Gallery One.