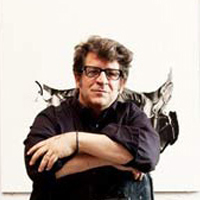 Robert Longo has had retrospective exhibitions at the Hamburger Kunstverein and Deichtorhallen; the Menil Collection in Houston; the Los Angeles County Museum of Art; the Museum of Contemporary Art in Chicago; the Hartford Athenaeum and the Isetan Museum of Art in Tokyo. Group exhibitions include Documenta (1987 and 1982); the Whitney Biennial (2004 and 1983); and the Venice Biennale (1997.) His work is represented in collections of the Museum of Modern Art, the Guggenheim Museum and the Whitney Museum of American Art, in New York; the Art Institute of Chicago; the Los Angeles County Museum of Art; the Walker Art Center in Minneapolis; the Stedelijk Museum in Amsterdam; the Centre Georges Pompidou in Paris; the Albertina in Vienna; and the Ludwig Museum in Cologne. Robert Longo was the recipient of the Goslar Kaiserring in 2005. Robert Longo is represented by Metro Pictures in New York City, Galerie Hans Mayer in Düsseldorf, Germany, and Galerie Thaddaeus Ropac in Paris, France. He is a co-founder and member of the band X PATSYS (with Barbara Sukowa, Jon Kessler, Anthony Coleman, Jonathan Kane, Knox Chandler and Ernest Brooks).