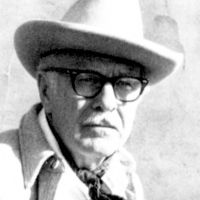 Robert Lougheed was born in Massie, a small farming village just below Georgian Bay, Ontario, Canada. At 19, he was a mail order and newspaper illustrator for the “Toronto Star,” studying art at night. At 25 he went to New York City for further study, taking off later that same year to tour the West, particularly the old Bell Ranch country of New Mexico. As a traditional Western painter, animal painter and illustrator, Lougheed championed realism at a time when mainstream American art had lapsed increasingly into abstraction.

He continued to work as a commercial artist and his illustrations appeared for more than 30 years in national magazines such as “National Geographic,” “Sports Afield, ” and “Reader’s Digest.”