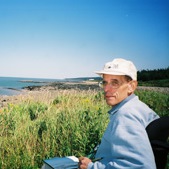 I love to paint and draw. I have always had an emotionally intense response to things visible, to images intuited through perceived clues -as if nature were holding up cue cards – and to those visualized mentally. At the same time, I have wanted to create works of structural rigor. My ideal involves a harmonious merging of emotion and intellect. To me, a work of art should evoke a visceral response and yet also induce a state of calm and measured contemplation.
I work in a variety of mediums – watercolor, acrylic, pencil, pastel, egg tempera – according to the requirements of idea and subject. Various subjects are depicted in my work: landscape, window view, still life, portraiture, sacred geometry. The organizing principle forming the undercurrent of my work is a mathematical base which finds form through geometry; hence, my use of the Golden Ratio, also known as the Golden Section or, in the Renaissance, as the Divine Proportion. Based upon a certain numerical ratio, it establishes a harmony between visual intuition and mathematical logic.
The use of the Golden Section establishes recurring rhythms and proportions throughout the work of art, all based upon and ‘echoing’ the initial ratio. As with the overtone series in music, all subsequent elaboration directly relates to the initial premise. In this way, the microcosm reproduces, on a smaller scale, the proportions of the macrocosm.
Gradually, I have come to realize that the purpose of art is linked with the purpose of life. This was made clear to me during a visit to India in 1972. I saw works which were conceived and executed according to spiritual principles. These principles were meant to evolve and stabilize certain human potentialities: focused contemplation, prayer to the deity, awareness of the divine. I understood that my life and art, in order to evolve and deepen to its full potential, should proceed from a focused anchor of contemplation. Art should not be a mere expenditure of mental and physical energy, dissipated and non-reusable. Through focused attention transmitted to the image, a spiritual energy is generated, dwelling within, animating the image. This energy in turn radiates benefit for the artist and viewer. By means of this approach both artist and viewer become aware of connecting links between spiritual truths and the rhythms and forms expressing these truths. It was at about the same time that I began regular practice of contemplation that ideas and images which had sporadically emerged in my work began, as it were, to revisit on a sustained basis. I refer to such themes as the cross, rainbow/arc, vessel, window, bodies of water and, most importantly, the Mandala.
While visual art – specifically painting and drawing – may not exist in time as does music, it is my hope that with each viewing one will perceive shifting rhythmic relationships, multiple color harmonies, and an evolving imagery assuming an infinite number of masks. A perpetual ‘newness’ exists; previously unknown aspects become manifest. In this way, art – as life – is perpetually one step ahead of both artist and viewer, forever eluding a singular, static mode of comprehension.