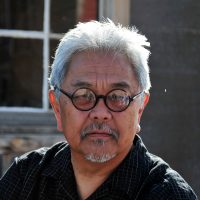 Roger Shimomura’s paintings, prints, and theatre pieces address sociopolitical issues of ethnicity and have often been inspired by the diaries kept by his late immigrant grandmother for 56 years of her life. He was born in Seattle, Washington and spent two early years away from his home in Minidoka, Idaho, one of 10 concentration camps for Japanese Americans during WWII.

Shimomura received a B.A. degree from the University of Washington, Seattle, and an M.F.A. from Syracuse University, New York. He has had over 125 solo exhibitions of paintings and prints, as well as presented his experimental theater pieces at such venues as the Franklin Furnace, New York City, Walker Art Center, Minneapolis, and The Smithsonian Institution, Washington, DC. He is the recipient of more than 30 grants, of which 4 are National Endowment for the Arts Fellowships in Painting and Performance Art. Shimomura has been a visiting artist and lectured on his work at more than 200 universities, art schools, and museums across the country. In 1999, the Seattle Urban League designated a scholarship in his name that has been awarded annually to a Seattle resident pursuing a career in art. In 2002, the College Art Association presented him with the “Artist Award for Most Distinguished Body of Work,” for his 4 year,
12-museum national tour of the painting exhibition, “An American Diary.”
The following year, he delivered the keynote address at the 91st annual meeting
of CAA in New York City. In 2006, he was accorded the Distinguished Alumnus Award from the School of Arts & Sciences, University of Washington, Seattle.
A past winner of the Kansas Governor’s Arts Award, in 2008, he was designated the first Kansas Master Artist and the same year was honored by the Asian American Arts Alliance, N.Y.C. as “Exceptional People in Fashion, Food & the Arts.”

Shimomura began teaching at the University of Kansas, Lawrence, KS in 1969. In the fall of 1990, Shimomura held an appointment as the Dayton Hudson Distinguished Visiting Professor at Carleton College, Northfield, Minnesota. In 1994, he became the first Fine Arts faculty member in Kansas University’s history to be designated as a University Distinguished Professor. In 1998, he was the recipient of the Higuchi Research Award, the highest annual research honor awarded to a faculty member in Humanities and Social Sciences. In the fall of 2002, he received the Chancellor’s Club Career Teaching Award for sustained excellence in teaching and dedication to students at KU. In 2004 he retired from teaching and started the Shimomura Faculty Research Support Fund, an endowment to foster faculty research in the Department of Art.

Shimomura is in the permanent collections of over 80 museums nationwide. His personal papers and letters are being collected by the Archives of American Art, Smithsonian Institution in Washington, DC. He is represented by Flomenhaft Gallery, New York City, Greg Kucera Gallery, Seattle, 8 Modern Gallery, Santa Fe, and Byron C. Cohen Gallery, Kansas City.