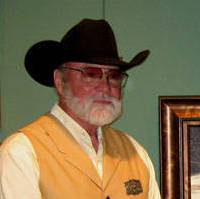 Roy Lee Ward is a native Texan making his home and studio in the hill country of Hunt, Texas. Roy was born in Graford, Texas but spent his early life growing up on a small ranch near Houston and later moving to the central Texas community of Waco.

Roy Lee Wards career as a professional artist consists of eight years as a freelance illustrator doing work for advertising agencies in Los Angeles, New York, Dallas, Fort Worth… His cover illustrations for magazines, book jackets, calendars and movie posters have been seen across the USA. He was selected by the Haas Corporation twenty-seven years ago to do a western calendar for publication & Distribution across the US that has won national awards in the advertising market. He has been involved with only studio paintings and murals since 1978. Doing what he enjoys doing the most – painting the historical and contemporary WEST. In 1995 the State of Texas honored Roy Lee Ward by proclaiming him the “Texas State Artist” in recognition of his paintings.