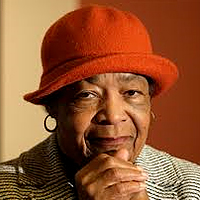 Artist and art historian Samella Lewis is renowned for her contributions to African American art and art history. Born in New Orleans, Louisiana, Lewis’s heritage led her to view art as an essential expression of the community and its struggles.

Lewis began her art career as a student at Dillard University, where she was instructed by the African American sculptor Elizabeth Catlett. At one of her instructor’s suggestions, Lewis transferred to Hampton Institute, where she earned her B.A. degree in art history in 1945. Lewis completed her graduate studies at the Ohio State University, earning her M.A. degree in 1948, and in 1951 she became the first African American woman to receive her doctorate in fine arts and art history. In order to publish Black Artists on Art (1969), Lewis founded the first African American-owned art publishing house, Contemporary Crafts.
From 1969 to 1984, Lewis worked as professor of art history at Scripps College in Claremont, California, becoming the college’s first tenured African American professor. Lewis also helped to found the Museum of African American Art in Los Angeles in 1976 and established the scholarly journal International Review of African-American Art that same year. The journal went on to become one of the leading forum for educating scholars and others about the many contributions African Americans have made to the visual arts. Lewis published African American Art and Artists in 1978, a history of African American art since the colonial era. Through the museum and journal she founded, Lewis created exhibition opportunities for African American artists which have bolstered their credibility.

Lewis’s work was exhibited in many important galleries and museums. Lewis’s deeply-personal art embodies some experience from her own life in each piece. Lewis received several awards and distinctions; in 1995, she received the UNICEF Award for the Visual Arts, and from 1996 to 1997 worked as a distinguished scholar at the Getty Center for the History of Art and the Humanities in Los Angeles. Scripps College has also named an academic scholarship in Lewis’s honor. Lewis and her husband, Paul G. Lewis, were married in 1948; the couple raised two children.