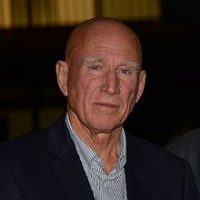 Sebastião Salgado travels the world documenting the poor and powerless, as well as the grandeur of nature, in analog black-and-white photographs that are both highly formal and unflinchingly documentary. Influenced by his training as an economist, and aligned with masters of documentary photography like Robert Capa and Henri Cartier-Bresson, Salgado focuses on the adverse results of globalization. As he explains: “Each of my stories is about globalization and economic liberalization: a sample of the human condition on the planet today.” That condition is one of peril for those at the bottom of the global economy, as photographs like Legs, Serra Pelada, Brasil (1986) attest. In this photograph, Salgado hones in on the taut, muscular legs of Brazilian miners. Barely covered by sweat-drenched shorts, the men’s legs seem strong yet fragile, as Salgado captures them straining against an incline of bare earth.