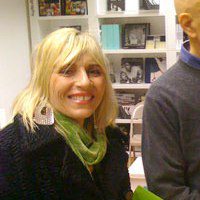 The Museum of Modern Art in New York City, featured Serena Bocchino working in her studio in a film documentary called, Observer Highway Revisited, by Monica Sharf of Inversion Films. Bocchino and her work have been the subject of a total of four films, the most recent of which, A Dream of Blue, by Down the Line Productions, received the 2009 Best Inspirational Documentary Award by the NY International Independent Film & Video Festival.

Bocchino has a Masters Degree from New York University, where she studied painting in the graduate program with Adele Weber, Sherrie Levine, Robert Kaupelis and Collette. Her color theory studies were with Voy Fangor. She also studied painting with Arie Galles, Printmaking with Marvin Goldstein and drawing and painting with Harold Keller.

Bocchino has been recognized by many art institutions for her work and is the recipient of numerous awards including the Pollock-Krasner Foundation Grant, the PS 1 International Studio Residency, the Artists Space/Artists Grant, The New Jersey State Council on the Arts, the Art Matters Grant, the Brodsky Center Printmaking Residency and the Basil Alkazzi Award. Her work is included in prestigious private, public and corporate collections throughout the world, including those of Art in Embassies Program, The Montclair Art Museum, The Morris Museum, The Jersey City Museum, Zimmerli Art Museum, Saks Fifth Avenue, Nordstrom, McKinsey & Co. Inc., Pricewaterhouse Coopers, Pfizer Inc and Johnson & Johnson.

Serena Bocchino has received extensive reviews of her work in many different periodicals and newspapers. Most recently, her solo 2008 solo exhibition at Tria Gallery in New York received a wonderful review in Art in America (March 2008). That same year, her paintings in a two person exhibition received similarly strong reviews in both The New York Times and Newsday.