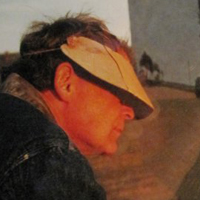 The American painter Sheridan Lord created a small but distinguished body of work. His main subject was the flat landscape of Eastern Long Island not far from his home in Sagaponack. He observed the work of its farms in all seasons, and he mastered the subtly shifting moods of its vast skies. Lord’s pictures get their strength from convincing structure, and their life from suggestive brushwork, which conveys fine nuances of color and tone. When the weather was good, Lord painted outdoors, and when it was too wet or cold, he stayed indoors and painted luminous, sensitive still lifes.

Lord had a late start as a painter. He had studied literature at Yale and served in the army, then became an art student at the University of Iowa. In the 1960s he taught at the Brooklyn Museum School. After much hesitation, Lord began in 1969 to paint landscapes seriously. He made rapid progress and soon had a following among several dozen collectors in and around New York. Most of his paintings sold right away and have since remained in the families of the first owners.

Lord was a much-loved member of a small community of writers, editors, and artists on Long Island who valued his sharp critical mind and his visual gifts. He was working as a representational artist at a time when most of his artist neighbors were painting abstract works, some of them having great commercial success. Lord said he loved abstract paintings by his neighbors Jackson Pollock and James Brooks and Bradley Walker Tomlin, but about abstraction he said, “It just wasn’t something I could do. It was totally opposite.”

Lord’s work has been closely held and never widely known. His pictures were included in various group exhibitions at museums and commercial galleries, but it was not until 1995—a year after his death at 68—that he was the subject of a retrospective. Held at the Parrish Art Museum in Southampton, NY, the show made it clear that Lord deserves to rank, along with Jane Wilson and Fairfield Porter, among the most accomplished realist painters of his time and place.