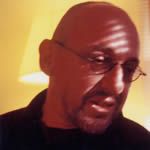 He has lived and worked in many locales, from Southern California to New York City, residencies in Europe, Hong Kong, and the Pacific Northwest. Today he is based in London and Paris.

Other credentials include association with the New York art journal BOMB, gallery, museum and group shows, publication as an Absolut artist, sponsored artist of Johnnie Walker Black Label Scotch Whisky, and a participant in the US State Department’s Art In Embassies program. His “New Wave Cookbook” is in the permanent collection of the MoMA NY.

In 2001, during his second appearance at the Biennale of Florence, he received a medal in digital art/new media for a work commemorating 9/11. In February 2006 he was named CEO of The Medinge Group, a Stcokholm-based high-level international think-tank on branding.