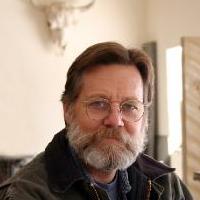 Through his childhood activities and studying outdoors, Steve Kestrel acquired an extensive knowledge of wildlife. His formal education began at Eastern New Mexico University where he studied natural sciences. He also studied sculpture at Colorado State University, but never completed his degree, claiming the professors were extraordinarily close-minded in their views of art. After leaving Colorado, Kestrel apprenticed for sculptor Boris Gilbertson in Santa Fe.

Since 1982, Kestrel prefers to carve directly in granite, slate, limestone, and sandstone, which are extremely sensitive and difficult materials that require great strength and concentration. He carves the stone without a previously constructed model, explaining that it is an attempt to preserve “the soul of the stone.” The sculptures often retain the natural shape of the raw material while clearly evoking the animal subject matter. In addition to working in stone, Kestrel has experimented with bronze casting, which has allowed the creation of more delicate forms that were not possible in stone.

Kestrel is a member of the National Sculpture Society as well as the Society of Animal Artists. His works are recognized in many private and corporate collections and in a number of museums, including the Wichita Art Museum in Kansas, the Gilcrease Museum, and the National Museum of Wildlife Art.