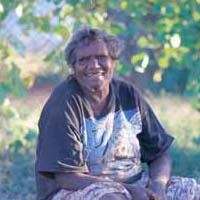 She lives in Warburton community where she began to paint in the early 1990s as part of the Warburton Arts Project. An outstanding painter, she produced 21 canvases for the Warburton Acrylic Collection, some of which were included in the Yarnangu Ngaanya: Our land Our Body exhibition at the Perth Institute of Contemporary Art and S.H. Ervin Gallery, Sydney, 1993.

In 1995, the artist began to work in the glass medium, producing a number of platters and then working on panels for inclusion in the Warburton Cultural Centre planned to open in 2001.

In 1998 she was the winner of the Normandy Heritage Art Prize, the Fourth National Indigenous Art Award. The raised linear designs in the translucent surface of the slumped glass are in contrast to those of her canvases in which colour and dotting are much to the fore.