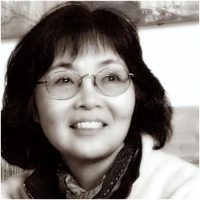 “I’ve painted many subjects in many different styles but my true love is in nature, specifically lands and sky- scapes. For the last decade or so, my focus has been into trees, forest and mountains and the different emotional responses they instill in me. By creating abstract and representational works, in a very loose interpretation, I am able to project the emotions I feel onto canvas. I paint from memories, through traditional training and through the experiences life has presented me. My main objective is simplicity and to be true to my feeling of the subject matter at hand.”

Teruko Wilde was born in Nagoya, Japan, moving to the United States as a teenager she studied at the University of Cincinnati and Columbus College of Art and Design in Ohio. An award-winning artist, Ms. Wilde has had numerous one person and group shows. She initially established herself as a prominent pastel and watercolor artist before moving to Taos in 1986. Expansive southwestern skies, approaching storms, and moody sunsets, describe the colorful oil paintings of Teruko Wilde, which became known as her ‘Southwest Series’ for more than a decade. Currently, the artist is combining all of her life experiences into multiple styles and techniques. The artist must be true to herself in the act of creativity’, states Wilde whose work is the culmination of her Japanese heritage and American experiences. Recreating both emotional as well as physical elements from her surroundings with overlays of color creating texture and intriguing shapes as past and present merge, the viewer is constantly moved by her work.