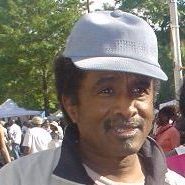 Tesfaye Tessema was born in Addis Ababa, Ethiopia where he studied at the School of Fine Arts before leaving for the United States in the early 1970s. He obtained an MFA in Fine Art at Howard University, Washington DC, where he was exposed to the richness and diversity of the art of Africa, especially the classical art of West Africa where myth, metaphors and legend abound. His extensive travels in the Middle East, Europe, Africa and Mexico over the years have further broadened his perspectives on the commonality in socio-religious forms among various cultures. He has been included in numerous international survey including “Project Rolywholyobei – Circus from the Museum by John Cage”, 1994, Guggeinheim Museum, New York and Radford University Art Museum, Radford, Va, 2008. His work is in several public and private collections”.