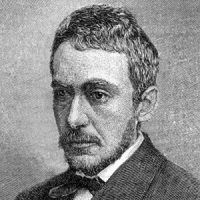 Thomas Cowperthwait Eakins was born in 1844 in Philadelphia, the first-born and only male of the four children of Benjamin Eakins and Caroline Cowperthwait. His father was a calligrapher and writing master, who supported his family in comfortable circumstances by his profession and through prudent investments. Eakins was raised in the family home at 1729 Mount Vernon Street and would live there for the rest of his life (it still stands). He graduated from the Central High School in Philadelphia and in 1862 began to take courses at the Pennsylvania Academy of the Fine Arts and attended anatomy lectures there and at the Jefferson Medical College. In 1866 he went to Paris, where he attended the École des Beaux-arts and studied with the French painters Jean-Léon Gérôme, who permanently influenced him, and Léon Bonnat and the sculptor Augustin Alexandre Dumont. Before returning to the United States he spent six months in Spain. He greatly admired Spanish painting, particularly the art of Velázquez, which would also be lastingly influential.

Eakins returned to Philadelphia in 1869, where he remained to the end of his life. He resumed his studies at the Jefferson Medical College, and in 1878 he began teaching at the Pennsylvania Academy of the Fine Arts, where he was appointed professor of Painting and drawing the next year. On January 19, 1884, he married Susan Hannah Macdowell, a student at the academy. In his teaching, Eakins was steadfast in his insistence on painting from the nude model. The controversy surrounding this practice led to his dismissal, with an aroma of scandal, from the professorship in 1886.

Eakins’ fame is almost entirely posthumous. He was little known and admired in his native city–when John Singer Sargent visited Philadelphia in 1903 and was asked what artist he would like to meet, he said “There’s Eakins, for instance.” The reply was, “And who is Eakins.”–and even less known outside it. Eakins died in Philadelphia in 1916, at the age of seventy-one.