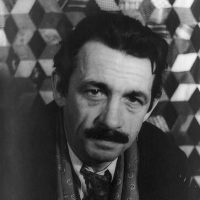 Thomas Hart Benton was a native of Neosho, Missouri. Benton’s style developed through his extensive study at the Art Institute of Chicago and in Paris at the Académie Julian and the Académie Collarossi. During his Paris studies, Benton experimented with a variety of styles, including the abstract methods of cubism. In 1912 he returned to the United States, settling first in New York City before moving to Kansas City, Missouri, in 1935. Benton was then at the height of his career, having made a significant reputation as a muralist, easel painter and educator. His move away from New York – the acknowledged center of the American art scene in the 30s – can be explained both by Benton’s rejection of contemporary art styles and by his significant ties to Missouri’s history. His father was a U. S. Congressman, and he was named for his great-uncle the first and longest-serving Senator of Missouri. These ties and his dedication to a truly American style and subject matter in art brought the artist back to his roots in the Midwest. The images he created of Missouri life, some of which were used for the Missouri state capital murals, consistently reflected his interest in the life and culture of his home state.