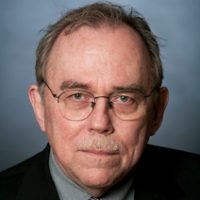 Thomas Nozkowski was born in New Jersey in 1944. He received his BFA from the Cooper Union in 1967, and currently lives and works in New York.

A critically acclaimed and influential abstract painter, Nozkowski makes small and medium sized paintings on panel or paper. Characterized by innovative color and composition, Nozkowski’s work is based on close observation of his surroundings. Abstracted forms are derived from shapes and patterns found in nature and from man made objects in the urban environment. This inspiration provides unexpected arrangements of color and form which can be equally jarring or beautiful, and always strikingly original in feeling. Nozkowski has made few etchings in his career. When Harlan & Weaver published his first forays into the medium, he embraced the technique and created two complex color aquatints.

Taking the opportunity to experiment with the multiple plate process inherent to color etching, Nozkowski made two separate images while using the same background plate, wiped in different colors, for both prints. In this way, he exposes the printmaking process while producing prints that echo and complement each other. Both exhibit his mastery of form, and his idiosyncratic use of color.

Nozkowski has received several awards throughout his career, including a National Endowment for the Arts Individual Artist’s Grant in 1984, a New York State for the Arts Fellowship in 1989, a John Simon Guggenheim Memorial Fellowship in 1993, two American Academy of Arts and Letters Purchase Prizes, in 1998 and 1999, and the American Academy of Arts and Letters Award in Painting in 1999. Among several gallery and museum shows, he has had major solo exhibitions at the Pace Gallery, New York, in 2010, at the Corcoran Gallery of Art, in 1997, at the Ulrich Museum of Art, Wichita, Kansas, in 1998, and at the Ace Gallery in Los Angeles in 2001. In 2003, he had an exhibition of drawings at the New York Studio School. He is represented by The Pace Gallery in New York. Nozkowski is a professor of painting at the Mason Gross School of Art, Rutgers University.