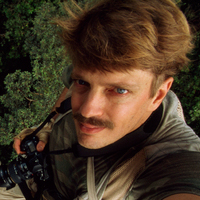 Tim Laman is a field biologist and wildlife photojournalist. He credits his childhood in Japan, where he had ready access to the mountains and oceans, for his strong interest in exploring nature, both above and below water.

Tim first went to the rain forests of Borneo in 1987 and the Asia-Pacific region has been the major focus for both his scientific research and photography ever since. His pioneering research in the rain forest canopy in Borneo led to a PhD from Harvard and his first National Geographic article in 1997. Since then, he has pursued his passion for exploring wild places and documenting little-known and endangered wildlife by becoming a regular contributor to National Geographic. He has 21 articles to his credit to date, all of which have had a conservation message. Some have focused on endangered species such as Orangutans, Proboscis Monkeys, or Hornbills, while others, such as a series of articles on Conservation International’s Biodiversity Hotspots, have highlighted regions under intense pressure. Tim has also published more than a dozen scientific articles related to rainforest ecology and birdlife.
Tim has developed somewhat of a reputation for being able to come back with shots of nearly impossible subjects like gliding animals in Borneo, displaying Birds of Paradise, and some of the most critically endangered birds in the world such as the Nuku Hiva Pigeon and the Visayan Wrinkled Hornbill of the Philippines. He continues to relish such challenges, and firmly believes that promoting awareness through photography can make a difference for conservation.