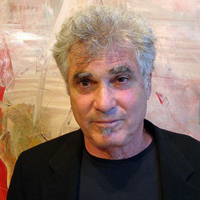 In 1974, Tom Lieber attended the University of Illinois and earned his M.F.A. Lieber then moved to San Francisco to fulfill his afinity with Bay Area painting. In 1975 he was a recipient of the National Endowment for the Arts. In 1982 he was selected for Emerging American Artists’ exhibition at the Guggenheim Museum, New York, curated by Diane Waldman. At this time he was also invited to join the John Berggruen Gallery. In 1983 Lieber began making large scale monotypes with Garner Tullis at Experimental Press. Through Tullis he has met John Walker, Sean Scully, Friedel Dzubas, Helen Frankenthaler, Sam Francis, William Wiley, and others. Throughout the mid and late 80s and the 90s Lieber’s work was shown nationally and internationally.

In the year 2000, Lieber moved to Kauai and continued painting works majorily influenced by the environment in Hawaii. He now shares his time painting between Los Angeles and Kauai.