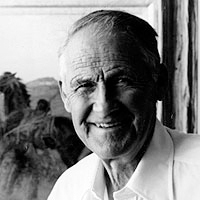 A Native American finds a Raggedy Ann doll on a lonely Western road. A settler is teaching his gingham dressed wife how to shoot a rifle. Three Indians warm their hands over the chimney of a snow buried cabin. These are just three of the dramatic stories that Tom Lovell told through his artwork. Lovell’s attention to detail is unmatched, and he was seldom able to complete more than a dozen paintings a year. His peers consider him one of the deans of Western art.

Lovell was born in New York City. He was the Valedictorian of his high school class; and at the graduation ceremony spoke on the “Ill treatment of the American Indian by the U. S. Government.” He received a bachelor of fine arts from Syracuse University in 1931. For thirty-nine years, Lovell worked as a freelance illustrator for magazines such as Colliers, McCalls, National Geographic, Life, and the Saturday Evening Post. He was as famous for his Western art as for his stirring images of Civil War battles, which were considered so definitive that they were telecast as part of an acclaimed public television documentary and published in the accompanying best-selling book.

Lovell considered himself a “storyteller with a brush, a custodian of the past.” “I try to place myself back in time and imagine situations that would make interesting and appealing pictures. I am intent on producing paintings that relate to the human experience and our Western heritage.”

In 1974, Lovell was elected to the Society of Illustrators Hall of Fame and was later named a Hall of Fame Laureate. In 1975, he and his family moved to Santa Fe, New Mexico, and he was elected to the Cowboy Artists of America the same year. In 1992, both the National Academy of Western Art and the National Cowboy Hall of Fame honored Lovell with a Lifetime Achievement Award and a prestigious one man retrospective show. He was the first artist to ever win the Prix de West – the National Academy of Western Art’s highest honor – twice.