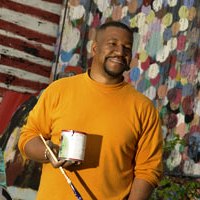 Primarily a painter and sculptor, Tyree Guyton has also been described as an urban environmental artist. He has waged a personal war on urban blight on Detroit’s East Side, transforming his neighborhood into a living indoor/outdoor art gallery. Through his art, Guyton has drawn attention to the plight of Detroit’s forgotten neighborhoods and spurred discussion and action.

This iconic colourfully painted polka dotted neighborhood, which symbolizes our society’s diversity, has played a vital role in transforming the visual indignities of poverty and have placed an international spotlight on the area, resulting in dramatic reductions in drug trafficking, gang violence, and crime. Guyton’s vision for Heidelberg is to transform the two block area into a state-of-the-art Cultural Village.

Guyton also exhibits his work extensively throughout the United States and the world. Guyton studied at the College for Creative Studies in Detroit and in 2009 was awarded an honorary Doctorate of Fine Art. His work is featured in the Detroit Institute of Arts, the University of Michigan Museum of Art, the Studio Museum of Harlem and many others. His work as an artist has earned him over 15 awards, locally and nationally.

Guyton has been featured in major publications, books, and television (including the Oprah Winfrey Show) and was the subject of the Emmy Award Winning Documentary, Come Unto Me, the Faces of Tyree Guyton; and more recently the subject of a book published in 2007 by WSU Press, Connecting the Dots, Tyree Guyton’s Heidelberg Project-a 2008 Michigan Notable Book.

Guyton is married and continues to live and work in the city of Detroit.