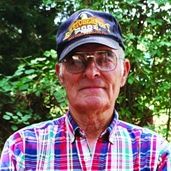 Vollis Simpson, the inventor of a wind-powered sculptural environment, worked the family farm in North Carolina until he was drafted into the Army Air Corps in 1941. When he was discharged in 1945, he opened a repair shop for trucks and tractors.

Simpson began building his kinetic sculptures while in the Army Air Corps. He constructed a windmill that “…picked up dirty clothes in baskets – slushed ’em through soapy water.” It was this experience and a surfeit of discarded materials from his repair ship that provided the impetus Simpson needed to create his unusual outdoor environment.