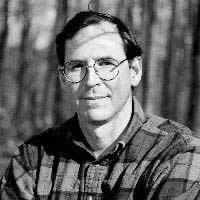 Walter Matia was educated at Williams College in Massachusetts, where he earned degrees in Biology and Art Design. Much of his training was attained during a long apprenticeship in the Exhibits Department of the Cleveland Museum of Natural History.

After leaving the Cleveland Museum, Walter worked for eleven years with the Nature Conservancy, a national non-profit organization dedicated to the preservation of endangered species and unique habitats. He served as the organization’s vice president in charge of land management.

He began casting bronze sculptures in 1980. Initially, he concentrated on bird life, over the years he has worked on sporting dogs and other mammals. In 1987 he began a series of large fountain and garden pieces. In 1989 the Blair House Restoration Committee placed one of his fountains in the formal garden of the United States President’s Guest House. To complement the fountain, Walter produced a bronze wall frieze for the Blair House in 1992.

His works have been exhibited in one man shows at the Cleveland Museum of Natural History and the Southern Alleghenies Museum of Art. Walter is a regular participant in the Society of Animal Artists shows, National Sculpture Society, Easton Waterfowl Festival, Plantation Wildlife Arts Festival and the Prix de West Invitational Exhibition. Walter is a Fellow of the National Sculpture Society. He received the National Sculpture Society’s 2003 Gold Medal Award for “Large Great Blue Heron Pair”; the 2005 Bronze Medal Award Pietro & Alfriedo Montana Memorial Prize for “A Fool for Love”; the 2006 Society of Animal Artists Leo J. Meiselman Award for “Molly is a Working Girl”; the 2006 Prix de West James Earl Fraser Award for “Promise of Spring” and the 2007 Masters of the American West, Kenneth T. & Eileen L. Norris Foundation Award for Sculpture. Walter Matia was named Master Wildlife Artist at the 2008 Birds In Art Exhibition at the Leigh Yawkey Woodson Art Museum in Waussau, WI. In recognition of the Society of Animal Artists Annual Award of Excellence and outstanding artistic talent Walter recieved the honor of Master Signature Member.

Walter’s sculptures have been selected for the prestigious Leigh Yawkey Woodson, “Birds in Art” exhibitions and have toured with various shows to dozens of museums both in the States and abroad. Outdoor commissions include: the Wichita Kansas Botanical Gardens; the Benson Park Sculpture Gardens in Loveland, Colorado; American University in Washington D.C., Deerwood Office Park in Jacksonville, Florida, the National Museum of Wildlife Art in Jackson Hole, Wyoming, the Cleveland Zoological Society and Heidleberg College, Tiffin, OH. In 1988 Walter was commissioned to produce the Merrill Lynch Bull at a scale of 1.5 times life-size, when completed they were installed at the corporate regional offices in Florida, New Jersey and Colorado. Fall 2001 Walter accepted a commission from the Houston Texans NFL team to sculpt six monument Spanish Fighting Bulls as team icons for the entrances of their new stadium in Houston, Texas. Six 1 1/2 times life size bulls were completed and installed August 2003. In 2004 Walter completed a twelve foot diameter sundial commissioned by the Cleveland Museum of Natural History which depicts the Evolution of Life. The ESSFTA, English Springer Spaniel Field Trial Association has commissioned a life size English Springer Spaniel which will be installed early 2007 at the Bird Dog Hall of Fame in Grand Junction,TN.