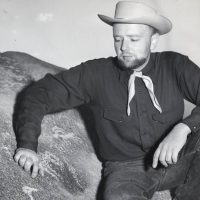 Photographer Bill Belknap Jr was assigned to the White House as part of his Navy duties during World War II. He photographed Presidents Franklin Delano Roosevelt and Harry S. Truman, accompanying Truman to Berlin to photograph the Potsdam Conference at which he captured notable figures such as Joseph Stalin, Vyacheslav Molotov, and Winston Churchill. The trip also allowed him to capture some of his most poignant photographs: a devastated city and the endurance of the human spirit.