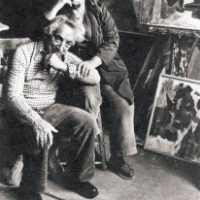 Lillian Orlowsky and William Freed first became acquainted in 1932 when both artists attended the Educational Alliance in New York. During the mid-1930s they were employed by the Federal Works Project Administration -Orlowsky as a painter in the easel division, and Freed in the mural Division. It was in 1937 that Orlowsky happened to encounter Freed as they waited in line to receive their W.P.A. paychecks. Orlowsky had recently begun taking classes with the controversial teacher Hans Hofmann at his new school in Manhattan, and she enthusiastically recommended that Freed join her in class. Shortly thereafter he did. Thus, Freed and Orlowsky began a personal and professional relationship –partnership if you will- that lasted almost fifty years.

The pair was associated with Hofmann and his schools in New York and Provincetown during the prewar heyday of the abstract expressionist movement. The community of avant-garde artists in New York and in Provincetown of which they were a part became a vital component of their artistic existence. In her later years Orlowsky often spoke eloquently about the collegial atmosphere of the W.P.A. and of the Hofmann School early years and the importance of this collegiality in her development as an artist. Orlowsky and Freed were artists to the core. Their lives were almost totally given over to their artistic pursuits, in Freed’s case for almost fifty years, and in Orlowsky’s almost seventy. They married in 1942, and in the years that followed, Orlowsky and Freed acquired by trade, barter, and/ or gift a sizable group of artworks created by their colleagues and friends. Some of these artists became successful -even famous. Others, are today less well known; nonetheless, Olrowsky and Freed, through the course of their lengthy careers, did assemble a substantial and important group of paintings by their colleagues and friends.

During the later years of her life Orlowsky donated a number of paintings from their collection to several museums, the Cape Museum of Fine Arts, the Provincetown Art Association and Museum, and the Rose Museum at Brandeis University among others. The remaining paintings along with a selection of paintings and drawings by Orlowsky and Freed form the body of the ACME Fine Art exhibition titled: Artwork from the Collection of William Freed and Lillian Orlowsky. This disparate group of modern paintings and drawings were certainly among Orlowsky and Freed’s most cherished possessions. They represent a remarkable selection of mid-century American modern art by some of the twentieth century’s most important artists. Highlights of the exhibition will be six mid-century paintings by Hans Hofmann, canvases by James Gahagan and Alice Hodges, and a fine group of works on paper by George McNeil, Fritz Bultman, and Robert DeNiro Sr.

Source of the Above: Press Release of Exhibition May 5 to June 11, 2005: “Artwork from the Collecction of William Freed and Lillian Orlowsky”, Acme Fine Art