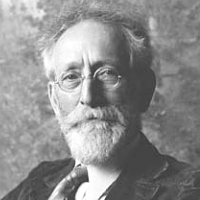 Lathrop was a doctor’s son, raised on a farm on the shores of Lake Erie. His attitude toward nature was, like George Fuller’s perhaps, conditioned by the “sadness of his long struggle to survive on his farm.” After finishing high school in 1874, Lathrop went to New York City to study art briefly before entering the United States Naval Academy. Failing at the latter, as well as in his attempt to start an artistic career in New York City, he returned to teach school and tend farm in Illinois. In the early 1880s, Lathrop finally secured steady employment as a graphic artist with Charles Parsons at Harper’s, where his “gift for simplification” was especially appreciated. In 1886 Lathrop went abroad to France, Holland, and England, visiting more provincial regions and avoiding the larger cities. Lathrop’s major break came when one of his small watercolors won the Evans Prize at the New York Water Color Club in the late 1890s. His first public exhibition soon followed, and while he was represented by the Macbeth Galleries, Lathrop won the Webb Prize at the Society of American Artists exhibition in 1899. In New York City, Lathrop roomed with John Twachtman in a Twelfth Street tenement in which Albert Pinkham Ryder was a neighbor. During the summer, he lived with J. A. Weir in Branchville, New York. By the early years of the twentieth century, Lathrop had moved to New Hope, Pennsylvania, where he established an art colony that included Edward Redfield, Charles Rosen, William Ramsey, and several others. Lathrop also taught classes in his New Hope studio.

“Passion and Patience” was Lathrop’s formula for success. His work is almost always marked by very simple compositions—usually little more than earth, sky, and a few trees, not unlike similar arrangements by such contemporaries as Ben Foster and Charles Davis; however, unlike the work of several of his friends (Daniel Garber, Redfield, and Foster), Lathrop’s strong elemental poetry is closer to that of Corot of Daubigny than it is to the more complex color schemes of the American impressionists.