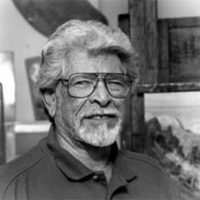 William F. Reese, internationally renowned artist died in June, 2010. He leaves behind an astonishing body of work that includes oils, pastels, watercolors, sculptures, etchings and instructional books. Reese celebrated the Northwest with majestic landscapes, delicate still lifes, and chronicles of the lives of the men, women and creatures that inhabited the area.

Born in South Dakota and raised in Central Washington, William F. Reese painted for over 50 years. Like most everyone he started drawing at age 3 or 4 but went on to begin painting in oil at 12. After high school Reese went to study fine art at Washington State College and then on to Art Center School of Design in Los Angeles. He worked as a sign painter and a sign pictorial artist for thirteen years, in Washington, Oregon, and California while he was building a following for his easel paintings. In 1971 he left the sign business to work full time in his studio in Bellevue, Washington, where he also taught privately the art of drawing and painting. Currently his studio is in Wenatchee, Washington where he is survived by his wife Frances.

Though prolific and proficient in several media, Reese was likely best known as one of America’s premier plein air artists, reveling in the majesty of the Northwest and setting up his easel outdoors in all kinds of weather and in every kind of location. His work is basically the diary of his life. Working mostly in oil, he also produced a large body of works in other media, such as watercolor, pastel, and sculpture as well as drawing, lithographs, and etchings. He works entirely from his life’s interest and experiences. Working from live models and in the field Reese relies heavily on personal observation, each piece a personal statement from and about his life. Reese’s work has been shown throughout the United States and in many exhibitions abroad. His work was included in the first exhibition of contemporary art from the western world in mainland China since China’s reopening.

Many art magazines in the last 35 years have published articles on Reese’s work. He was the subject of an award winning book by Mary N. Balcomb entitled “Wm. F. Reese”, American Artist published in 1984, as well as one written by Arlene Kirkpatrick entitled “Masterworks of American Art” Published in 1985.

Because of his broad interests, great range of subject matter, and diversified media Reese is a very a difficult artist to categorize and label as to style and school, most will probably label him as a post impressionist with a touch of expressionism.