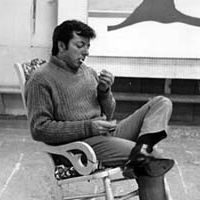 William Ronald, R.C.A. (born William Ronald Smith) was an important Canadian painter, best known as the founder of the influential Canadian abstract art group Painters Eleven in 1954.
Ronald was a graduate of the Ontario College of Art who quickly found that abstract painters could not get their work exhibited in Toronto galleries. Working for the Robert Simpson Co. department store, he persuaded management to pair abstract paintings with furniture displays, thereby discovering a way to get the public to accept non-representational art. Despite the success of the show, Ronald resented the city’s general attitude toward its artists and moved to the United States, eventually becoming an American citizen. Ronald shared a studio with Frank Stella and joined the stable of artists at Manhattan’s Kootz Gallery. He was quickly accepted by critics and collectors and enjoyed a multi-year period of success. Eventually, Ronald returned to Toronto, partly for personal reasons and partly because he could not agree with Kootz.
Besides painting, he became known as a CBC (Canadian Broadcasting Corporation) journalist, a columnist for the Toronto Telegram, and host of a Citytv variety show. He continued to paint through the 1970s, ’80s and ’90s, moving to Montreal, Quebec, and then to Barrie, Ontario where he maintained an active studio. He gained some notoriety for his portrait series of Canadian Prime Ministers, a pioneering non-representational portrayal of heads of government opened by Prime Minister Pierre Trudeau in Toronto. The exhibition toured Canada, despite warnings not to exhibit the less than flattering portrait of then Prime Minister Brian Mulroney. They are currently part of the permanent collection of the Kitchener-Waterloo Art Gallery in Kitchener, Ontario. Never a stranger to criticism or polemics, Ronald loved to paint in public, frequently hiring strippers and showgirls to dance around him as he painted. He continued to paint until his death in 1998 and in fact suffered a heart attack while painting. He lived long enough to name the work Heart Attack and succumbed a few days later.