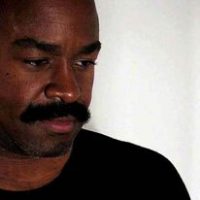 Multimedia installation artist and storyteller Willie Little received his Bachelor of Arts Degree from the University of North Carolina at Chapel Hill. He has been featured on National Public Radio and numerous television programs. His work has been exhibited at the Smithsonian Institution in Washington, D.C. and in many other cities including Philadelphia, Detroit, Dallas, Kansas City, Atlanta, Charlotte, and Sante Fe to name a few. He has also exhibited overseas in numerous countries including Germany, Belgium, and South Africa.

Willie Little was born and raised in rural North Carolina. Understandably, many of his works are rooted in the Southern traditions of his upbringing. Little has vivid memories of the characters and scenes at his father’s illegal liquor house that functioned “during the day” as grocery store. In an incredibly lucid manner, he has translated this living texture in both figurative and abstract ways. His work enlivens all of our senses and emotions. Little “sees beauty in history and decay”. His work also seems to point to another chapter in the story, which centers on hope, restoration, discovery, and triumph.

Little’s oxidation paintings utilize acid and iron particles to achieve a look of aged metal. They have a very organic feel in their expression of time. We can find subtle landscapes within the panels that defy scale. The layered and eroded material is subject to the artist’s environmental manipulations (exposure to heat, light, and air) creating permanent, brilliant, sometime iridescent, surfaces.

Willie Little’s work is multidimensional in the sense that it speaks of both culture and nature. His work transports us into another world where we can imagine ourselves immersed in the color, sound, and smells of the human condition. We can just as easily imagine flying through the space between the very small and the very large. His work is empowering.