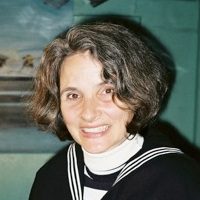 Wilma Parker is a graduate of Rhode Island School of Design (BFA) and the Art Institute of Chicago (MFA). She is a member of the U.S. Coast Guard Art Program, The American Society of Marine Artists, Tailhook, and the Salmagundi Club of New York City. She was awarded the George Gray Prize, Coast Guard Art Program, Salmagundi Club, 1994. In 2009, she was included in the Robert Rauschenberg Tribute Show, Museum of the Gulf Coast, Port Arthur, Texas.