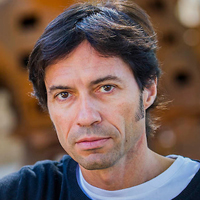 Xavier Mascaró is an Spanish artist, born in Paris, France. He moved with his family to Spain in 1968.

He produced his first paintings and etchings in 1979. In 1983-88 he studied at the Barcelona School of Fine Arts, graduating in the speciality of painting. In 1989 he produced his first works in bronze and in 1995 he began to work with iron. In 1996-98 he lived in New York. He then returned to Madrid, where he worked on the production of monumental works, some of which are installed in Ceutí (Murcia province), Jerez de la Frontera (Cadiz province) and Pinto (Madrid province). In 2004 he moved back to New York . About that time he started experimenting with works in different materials, including stained glass, resin and stone.