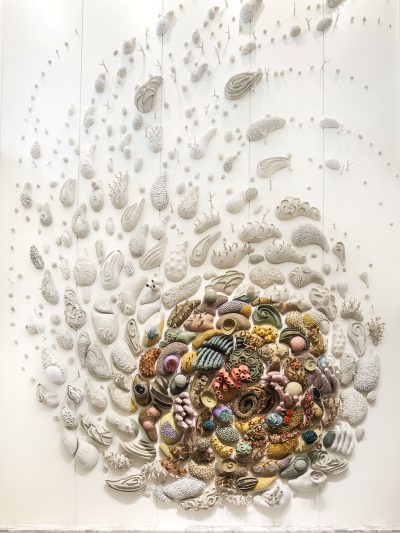 The latest installation by ceramicist and ocean advocate Courtney Mattison is Confluence (Our Changing Seas V), a porcelain coral arrangement produced for the US Embassy in Jakarta, Indonesia. The site-specific work features a vibrant cluster of coral structures at its center which turn stark white the further they are placed from the installation’s core. This shifting gradient references the rapid devastation caused to reefs as temperature levels rise and force corals to lose their colorful algae.

This installation is a celebration of Indonesia’s coral reefs, while also pinpointing the human-caused damage that infects the vibrant systems. “Corals, anemones, sponges and other reef-dwelling invertebrates coalesce into a cyclone-like spiral with colorful healthy corals at the eye of the storm, their tentacles and branches dancing in the current,” explains Mattison. “Toward the edges and tail of the swirling constellation, corals sicken and bleach, exposing their sterile white skeletons—a specter of what could be lost from climate change. Yet at its heart the reef remains healthy, resilient and harmonious.”

Indonesia is located at the heart of what is called the “Coral Triangle” or “Amazon of the Sea.” This environment is host to more invertebrate species than can be found anywhere else on the planet, in addition to thousands of species of fish which thrive in the rich ecosystem. Mattison hopes that her handmade constructions of the Coral Triangle’s diverse specimens produces an excitement in viewers while sparking an interest to protect the delicate balance found in Indonesia’s coral systems.

Mattison is exhibiting another recent installation titled Afterglow (Our Changing Seas VI) in the group show Endangered Species: Artists on the Frontline of Biodiversity, curated by Barbara Matilsky, at the Whatcom Museum in Bellingham, Washington through January 6, 2019. Mattison will travel to Bali at the end of October to unveil a 60-foot-long community-based coral installation she designed for the Coral Triangle Center in Sanur, Bali titled Semesta Terumbu Karang—Coral Universe. The work features over 2000 elements sculpted by a team of over 300 volunteers, coral reef conservationists, and Balinese artisans. You can see further conservation-based projects by Mattison on her website and Instagram.