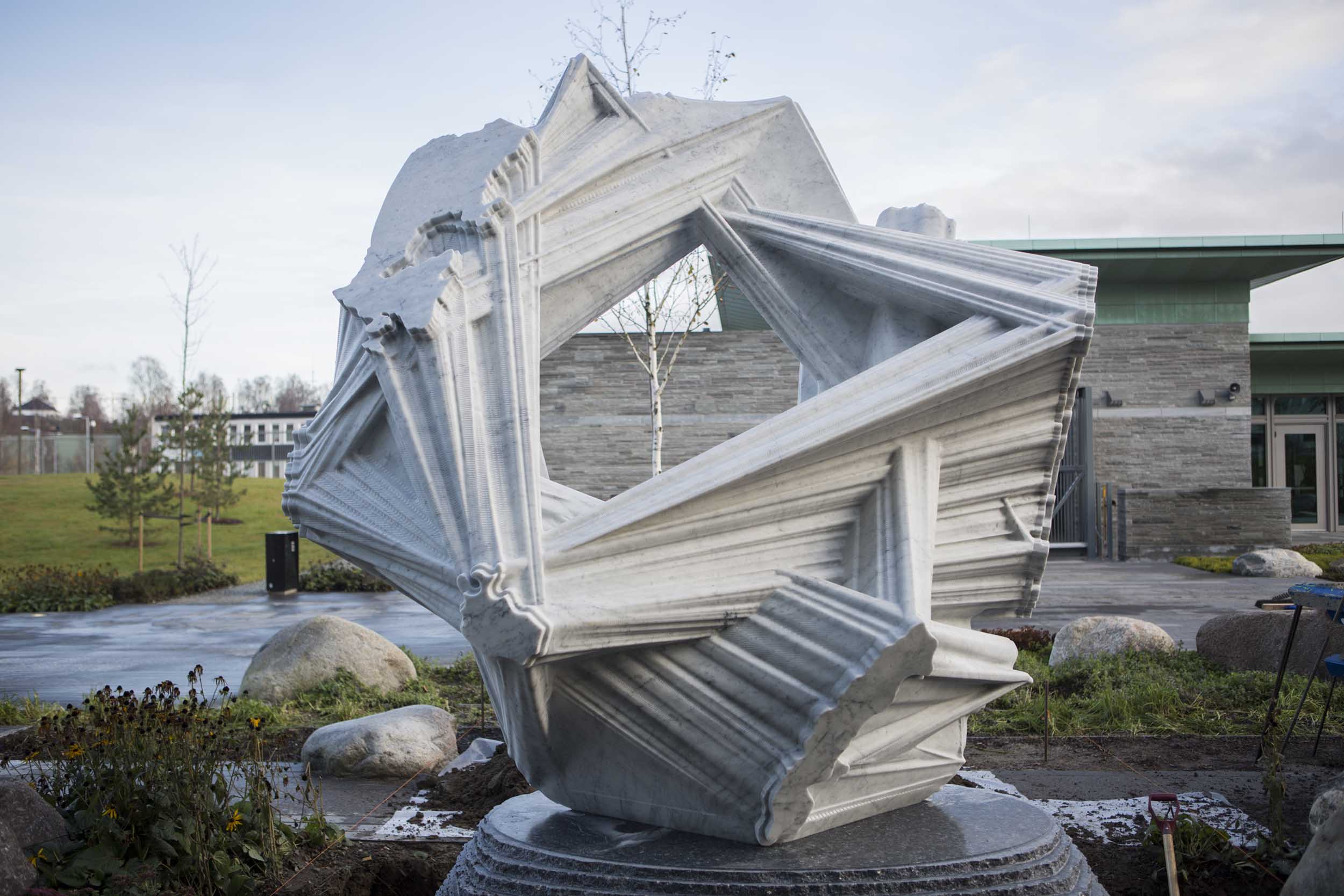 “Like anyone who’s looking at climate change, you’ve read a hundred articles and you’ve seen these data points, but you don’t really comprehend it, and the moment that it becomes visual, or later on in the project the moment when it becomes a sculpture, when it becomes material, you look at the thing and you suddenly understand what that means…”

In 2014, Art in Embassies entered a four-year partnership with Bennington College to create an outdoor commission for the new U.S Embassy in Oslo. Norway.

During a yearlong curriculum devised by sculptor Jon Isherwood and Susan Sgorbati, director of the Elizabeth Coleman Center for the Advancement of Public Action at Bennington College, a cross-disciplinary team of students researched public art models and the history and arts of Norway before deciding to focus on the Arctic Circle and the eight member countries of the Arctic Council. The interrelated sculpture, plantings, and graphics map strategic pathways, populations and resources connecting the region with outlines of the member countries as endpoints. Installed and dedicated in the fall of 2018, the project highlights our ties to this changing ecosystem and seeks to encourage dialogue through our common bonds, concerns, and successes.

To realize the project, the college established a year-long curriculum titled “Art in the Public Realm.” After studying various models of public art, a team of faculty, staff, and students focused their research on Norway itself, investigating topics ranging from the arts, anthropology, and environmental sciences to economics, politics and current events. Complexity graphics and digital carving, along with more traditional techniques, contributed to the final commission titled Arctic Shift.

There were complicated issues to consider related to the artwork’s specific location in Oslo: the politics of the Arctic region, climate change and other environmental and conservation issues, Norway’s role in world politics, oil and gas development and its relation to the Norwegian and U.S. economies, the design of the embassy itself, the landscape design that would surround it, and its relationship to its urban neighborhood.

Adding to the complexity of the project was the fact that the sculpture would not be created to complement an already-existing building. Instead, the new embassy would be designed and completed at the same time, creating unknown and unfolding contingencies to which the class would have to respond.

Students delved into the history of site-specific art created for public spaces and the considerations that go into its form—such as landscape, geology, and ecology—and thought about the implications of creating an artwork for the unique cultural form of an embassy.

To assist the students in grappling with these issues, a series of visitors—representatives from the U.S. Department of State, Art in Embassies staff, architects, public artists, and curators—came to campus to sit down with the them.

Art in the Public Realm