“First of all it was an honor to be asked by the U.S. Ambassador to have one of my sculptures. I am truly appreciative of that. Second it has opened my eyes and broadened my horizons for making positive contributions and interaction with other artists around the planet. The more we exchange ideas, the closer we can rely on and trust each other. To realize this first hand is a gift.”

Artist George Sherwood travelled to Conakry, Guinea, in June of 2016, to install one of his sculptures in the garden of the residence of Ambassador Dennis Hankins, on loan for the Art in Embassies exhibition at his residence. “This was truly an outstanding opportunity, adventure and enlightening experience. I had never been to Africa before and in particular a challenged environment like Conakry. It really opened my eyes to the harsh conditions that exist in other parts of the world that I couldn’t possibly grasp without being there to witness it first-hand. I was also struck by the fact that even though the conditions were extreme that people were going about business, conducting commerce, laughing and playing and making the best of their lives despite the calamitous environmental situation. I was also very much inspired artistically by this city landscape, the rough and tumble labyrinth of colors, forms and sounds.”

In addition to spending a couple of days, working with local artisans on creating the foundation for the kinetic artwork, Sherwood also conducted a series of workshops, in which he had the opportunity to meet with the artists that represent the Conakry art scene. “It was quite satisfying to work with the local artists during the workshops in the city. I was thrilled to be put right in the middle of it.” Sherwood also presented a lecture at the Embassy titled “George Sherwood Work and Methods”. As the artist observed “I thought the audience at the library presentation was one of the best I’d ever seen. They asked some really insightful questions afterwards.”

Sherwood conducted a workshop at Jardin 2 Octobre, which is where the artist had another notable experience. As Sherwood describes it “We had gone through a series of exercises learning about space, time and balance. Using very simple props, the final exercise was for each person to create their own kinetic sculpture using sticks we picked off the ground in a nearby parking lot. The challenge was to see how many sticks could be balanced off the top of a each chair. I was struck by the simplicity of the means and the end result was so much fun and everyone was so focused on their own creation.”

The exchange concluded with a reception at the Ambassadors’ residence where George his sculpture Anemone of Eight Gyres was unveiled .Sherwood got to reconnect with one of the artists he had met during one of his workshops. “One day during one of my workshops I had a chance to meet one of the local artists. His name was Sekou Thiam. During the conversation I told him that I really liked the shirt he was wearing. He told me it was something he made himself. It was a very colorful shirt sewn together with many different patches of fabric. A few days later at the Ambassadors reception for my sculpture Thiam walked over and handed me a hand wrapped package. It was one of his shirts that he made for me that week. That what quite special.” 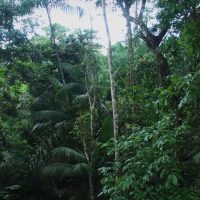 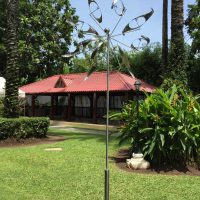