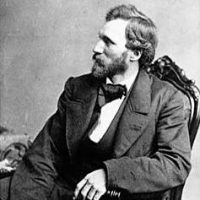 Aaron Draper Shattuck was born in Francestown, New Hampshire. Shattuck studied in both Boston and New York City with Alexander Ransom. In 1856 he was elected an associate member of the National Academy of Design. He summered in Conway that same year. He returned to Conway in 1857, settling in an old farm house near the Moat Mountain House. He became a full member of the National Academy of Design in 1861.

His specialty was New England landscapes, often of the White Mountains of New Hampshire. He also painted barnyard scenes of cattle and sheep on his farm in Granby, Connecticut. His paintings today hang in several major museums including the Albright Art Gallery in Buffalo, New York. His last known address was Granby, Connecticut where he lived since 1868. At the time of his death, he was the oldest member of the National Academy of Design.