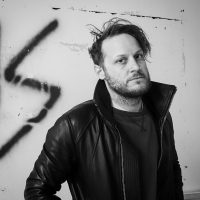 “It is important for me to use the platform of art making to address my political concerns. My artwork directs attention towards social themes of power, violence and anarchism by subverting minimalist tropes. As an artist, I make my work from the position of the Anti-Hero. For me, the symbol of the Anti-Hero (commonly understood to lack conventional heroic attributes) represents the idea of overcoming alienation. This theme allows me to explore my political interests while simultaneously drawing from my life experiences. I adopt certain languages from the Minimalist canon with a distinct political slant. Ad Reinhart’s Black Painting(s) enact a form of protest addressing social and artistic ideals. My Death Marks the Spot series act in protest to governmental, capitalist violence. Politically, I am focused on the spaces in which commitment to any ideology obstructs humanity from progressing. I reference anarchy as I see anarchistic acts as attempts to reconcile these obstructions. Though my artwork spans a range of disciplines I often employ red herrings as a conceptual framework to contradict the expectations of my gestures with political themes. Exploiting seductive aesthetics is a methodology that enables me to interject my political positions without being overtly didactic. By producing accessible art objects, I am able to permeate my position from the inside, rather than explicit display from the outside.”