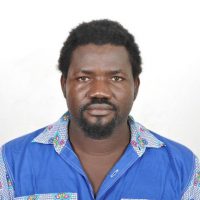 Abdoulaye Barry was born, in 1980, in N’Djaména, where he currently lives and works.

He started his career as professional photographer covering wedding ceremonies, portraits of newborn babies, the deceased, and families. In 2005, he was assigned by the UN High Commissioner for Refugees (UNHCR) to cover the precarious living conditions of the Farcha refugees in Chad.

Following a photography internship with Bruno Boudjelal at the French Cultural Center of N’Djaména in 2006, he produced a much more personal series that foreshadowed the engaged aspects of his future work. Abdoulaye Barry is interested in the changes taking place in his hometown, and the marginalization of certain social groups. Through portraits and scenes from daily life, occasionally working in the twilight hours, he exposes the difficulties and dangers encountered by street kids, the depraved and carefree youth, as well as the fishermen of Lake Chad, that see their main livelihood threatened by pollution.

His work has been shown at numerous events, the Bamako Biennial, in 2009, at which he was awarded the Jury’s Prize, and, in 2012, at the Royal Museum for Central Africa, in Brussels, Belgium.