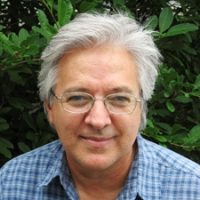 Abelardo Morell was born in Havana, Cuba in 1948. He immigrated to the United States with his parents in 1962.

He has received a number of awards and grants, which include a Cintas grant in 1992 a Guggenheim fellowship in 1994 and a Rappaport Prize in 2006.

His publications include a photographic illustration of Alice’s Adventures in Wonderland (1998) by Dutton Children’s Books, A Camera in a Room (1995) by Smithsonian Press, A Book of Books (2002), a publication of Morell’s photographs of books, introduced by Nicholson Baker and published by Bulfinch Press. Bulfinch Press has also published, Camera Obscura (2004), featuring sixty of Morell’s camera obscura photographs and introduced by Luc Sante. Most recently, Phaidon Press released Abelardo Morell (2005), a retrospective work featuring 105 photographs and introduced by Richard Woodward.

Recently, filmmaker Allie Humenuk has completed a film entitled Shadow of the House, an in-depth documentary about Morell’s work and experience as an artist. The film will have a premiere at the Boston 2007 Independent Film Festival this April.

The Frost Art Museum in Miami has organized a traveling exhibition of the show Vision Revealed: Selections from the work of Abelardo Morell, beginning in May, 2006 and showing in Brazil, Chile, Argentina and Mexico. A large retrospective traveling exhibition organized by Tf Editores in Madrid of Morell’s work premiered in Malaga, June 2006 This exhibition will go to four other major cities in Spain.

Morell is a professor of art at the Massachusetts College of Art in Boston, MA. He lives in Brookline, MA, with his wife Lisa McElaney, a filmmaker, and his children Laura and Brady.

Photo courtesy of the artist.