Abraham Goos was a highly regarded engraver working in Amsterdam who worked on plates for many of the maps published in famous atlases of the period including John Speed’s ‘A Prospect of the Most Famous Parts of the World'(1627) and the 1632 edition of Speed’s Atlas. He was also employed as an engraver by the Hondius family to whom he was related. 1n 1616 he published a book of maps entitled the ‘Nieuw Nederlandtsh Caertboeck’ which was twice re-issued.
His son, Pieter Goos(c.1615-75) expanded the business and was a well-known engraver of sea charts, one of a number active in Amsterdam in the mid 17th.Century. He published a pilot book, the ‘Zee-Spiegel’, based on plates got from another engraver, Jacobsz. Many editions were published in various languages. At the time, such pilot books were usually published in three parts covering Europe, the Atlantic coasts and the Mediterranean but Goos developed the format further by including two more parts which provided charts and directions for the West Indies and West Africa. Later editions of his work were published by his widow who finally sold the rights to Jacobus Robijn(c.1649-1707). 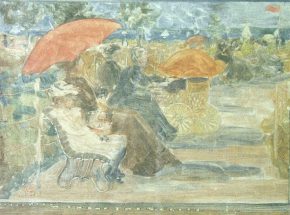