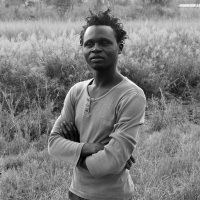 Admire Kamudzengerere’s (b. 1981, Harare, Zimbabwe) work explores identity, politics, and society, often informed by the multifaceted structural and social issues that have marked Zimbabwe’s last decade. Working in various media, he frequently reveals an unequal world in which the powerful ride roughshod over the weak. His monotype self-portraits, intense and indefinable, speak to personal struggle, self-definition, and father-son relationships, but are also pieces of a universal puzzle invoking a unifying human thread—the fil rouge of community and ancestry.

Kamudzengerere has exhibited internationally including his completion of the prestigious Rijksakademie van Beeldende Kunsten, Amsterdam program. In 2017, he mounted his first solo exhibition at Catinca Tabacaru Gallery in New York City, completed the Triangle Residency in Brooklyn, represented Zimbabwe at the 57th Venice Biennial, and was acquired into the Block Museum’s permanent collection. Most recently Kamudzengerere exhibited at the Portland Center for Contemporary Art & Culture, was awarded the On Demand Prize by Snaporazverein at MiArt, and is currently exhibiting at The 13th Dakar Biennale