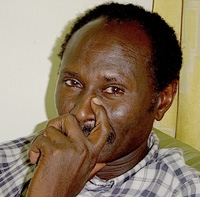 Ahmed Amir Jabir is an award-winning and a published Sudanese-British artist. He is also a researcher and teacher of art & design and workshops facilitator (He gives talks on art & cultures appropriately). He studied Art & Design in the Sudan and the UK (BA in Graphic Design and MA in Art, ?Design & Visual Culture, PGCE in Art & Design from Sudan University, Guilds Hall/London Metropolitan University and University of London respectively).

Jabir has mounted many individual exhibitions and participated in many group exhibitions and artistic workshops worldwide. He worked as a graphic designer and a journalist/art critic with many English and Arabic magazines and newspaper. For example, he worked with ‘Heritage’ newspaper of Southern Sudanese, Khartoum Magazine (Majalat Al-Khartoum, published in Arabic by Sudanese Ministry of Information & Culture). He also edited the page of ‘Artist’s Vision’ of Sudanow magazine as well as created the page ‘Reader’s Gallery’ of New-Horizon Newspaper (both published in Khartoum-Sudan from 1984-1992). In London Jabir has founded with a group of creative writers a magazine called ‘The Write Spark’ (sponsored by Stoke Newington Library in North London in 2000).

As an educationalist Jabir has devised/taught many Art & Design courses and scheme of works for children and adults in Sudan and UK as well as led/facilitated with others many ?artistic and educational workshops. For example, in Sudan he taught at Palace of Children & Youth in Omdurman, College of Fine & Applied Arts- Sudan University as well as Unity High School in Khartoum. In the UK he taught at South Thames College, Brady Art Centre, ST Mary High School, ST Angela School (all in London). He also has assessed candidates against the UK G/NVQ ?standards.

Selected Awards:
In 1994, 1998 and 2000 NOMA International Prize for Picture Books from the Asian/Pacific Cultural Centre for UNESCO, Tokyo, Japan. In 2000 he was awarded Certificate for Work of High Calibre on “Inspired by the V & A Collections”, Victoria & Albert Museum, London. In 1994 he was granted the British Council Scholarship. In 1993 he won the Moulid’s Grand Prize for Painting, Sudan. He also won the Gold Prize of Sharjah’s Biennial (Sudan’s Pavilion), UAE, in 1993. Furthermore, he was a winner of the Bronze Medal of Cairo’s Biennial, Cairo, Egypt, in 1984.

Exhibitions:
Although Jabir has participated in many group exhibitions and artistic workshops worldwide, he has also mounted many individual and group exhibitions worldwide. Among his major solo exhibitions he mounted ??’Women in T S Eliot’s Poetry’ and ‘Men in Eliot’s Poetry’.? Jabir works in a range of media and styles. He also creates some kind of links between his artwork, music and literature and covers issues focusing peace, love and friendship. Recently he is writing his first novel and planning to produce artwork to visualize relevant features from his writing.
As an artist and educationalist, Jabir believes in the roles of art exhibitions and education in enhancing creativity and empowering people with relevant knowledge, understanding and skills. In this respect once he said: “By thinking of art as a way of expression and graphical communication as well as a curriculum subject, I would like to say that my mission focuses on celebrating the role of multicultural countries worldwide in creating cultural dialogues. In general such countries open doors widely for the welfare of the mankind in our era of the so-called Global Village”. Furthermore, he added: “I really believe that with strong will and determination, great countries like the UK and the USA (who gave us a poet like Eliot) can play a significant role in bettering our world”.