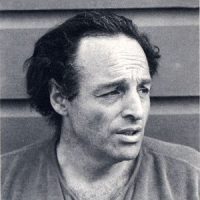 Al Held (1928-2005) studied at the Art Student’s League in New York and the Academie de la Grande Chaumiere in Paris. He was an Associate Professor of Art at Yale University from 1962-1980.

Al Held’s perceptual world concerns itself with architecture, with intersecting planes, perspective, counter-perspective, and bright areas alternating with dark contrasts. It is a paradox of mass and weightlessness that is inspired by, and then departs from, Renaissance perspective and ideas.

The more one looks at a Held painting, the more one encounters a world that defies visual expectations. Images recede and grow, thrust inward and outward, change scale and direction, and build an orderly yet seemingly impossible space. Overall, however, there is a pervasive calmness and clarity, a beauty of linear form and color sensibility.

In 1981, Held established a residence in Camerata, Italy. Here he began a series of watercolors that continued for the remainder of his life. These works possess a greater freedom and spontaneity than is usually the case with Held’s larger canvases. At the same time the rigorous quality of the medium allows little room for error. The works then, are all the more remarkable for their interactions of color, form and light. In the last decade of his life, Al Held undertook numerous public commissions, the most recent of which include large-scale works for the New York subway, and two works in Florida, one for the Orlando Museum of Art, and another for the new public library in Jacksonville.