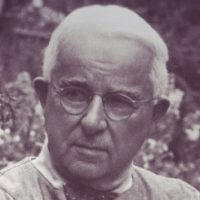 Albert Thomas DeRome studied at the Mark Hopkins Institute of Art in San Francisco, California, with Arthur Mathews, John Stanton, and Lorenzo Latimer. He worked as a political cartoonist and advertising director for a candy company before becoming a landscape painter. After a serious auto accident in 1931, DeRome settled in Pacific Grove, California, where he painted with Carlos Hittell, Gunnar Widforss, Frank Moore, Percy Gray, and Will Sparks. An insurance policy prevented him from selling his work or exhibiting as a professional artist, but he did exhibit as an “amateur” in Northern California, gaining recognition and winning several first prizes. DeRome became known for beautifully composed and beguiling views of the California coastline.