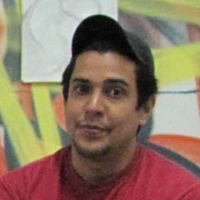 Alejandro Contreras was born in 1983 in Caracas, Venezuela. As a child, Contreras was constantly deconstructing and re-imagining objects in his environment. He moved to Coral Springs, Florida on October 5th 1998, and after 2 years relocated to Miami. He studied at DASH High school and graduated in 2003. He began his education immediately following at the New World School of the Arts and graduated in 2007, with a concentration in Electronic Intermedia. Since that time he has devoted his creative energy to traveling around the world, developing a vinyl signage business that serves the majority of the Miami Arts community, as well as creating art works and installations for both public and private clientele.