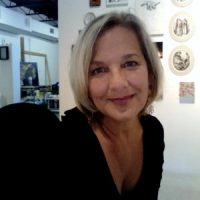 I create work in multiple media driven by what I have experienced and felt, externalizing and focusing on the integrity of the moment.

I see the landscape of Earth and the Heavens as a platform for humanity, a base from where I can understand the infinite and the infinitesimal, and my place within it. Imagery and form is abstracted and manipulated from small moving discoveries of shape and structure found in my surroundings, occasionally my back yard, but sometimes as far away as the next galaxy.

My work is formed through layers and intricacies of experience, interconnected by a common thread, and the physical handiwork of mesh-like spaces enveloping exposed light. These works require a unique degree of labor intensivity through which the latent is often discovered.

I combine traditional media with other less obvious materials and resources. For me there is a personal magic in transforming construction rebar, doilies, paint-dripped recycled cardboard, or a fallen bird’s nest. I desire for technique and material to conjoin with each viewer’s personal intellect, to be understood and revealed, each by way of the other. The works are complete with the engagement of the spectator drawn into a universal, yet also, a personal conversation.

Alette Simmons-Jimenez received a BFA in painting and sculpture from Sophie Newcomb College of Tulane University and currently works in mixed-media drawing and assemblage, installation, and video.

Simmons-Jimenez began her studio practice in the Dominican Republic immediately after her university training. Her first exploration into installation and video art was awarded a 1st Prize in Video, at the XVIII National Biennial, of the Museo De Arte Moderno, in Santo Domingo. She is recognized as the first woman artist to exhibit video art in that country.

After relocating to Miami, her work continued to win numerous grants and fellowships including: a Mastermind Genius Award, a Knight Arts Grant, a Tourism Development Grant from Miami-Dade Cultural Affairs, a Community Grant, also from Miami-Dade Cultural Affairs, a Xurau Mozu Prize from Optica International Video Festival in Spain; Artist Enhancement Grant from FL Dept. of State, the April Z. Newhouse Award from NAWA in New York; a Merit Award from the Renaissance Center for Visual Arts in Tennessee; and from the FL Department of State, a Painting Fellowship in 1998, and an Honorable Mention in 1995.

The artist has exhibited internationally and has works held in permanent collections at the Mobile Museum of Art, Alabama; Santo Domingo’s Museo de Arte Moderno; Mastercard International; the Jaffe Center for Book Arts; Louisville’s 21c Museum; and numerous private collections. Her work has also been selected for exhibitions with the US State Department’s Art in Embassies Program (AIE), in 1999 in Honduras, and currently in Riyadh, Saudi Arabia. Numerous articles, reviews, and interviews on her work have been published in print and on electronic media, and selected for the “New American Paintings” journal twice, featured once on the cover.

Simmons-Jimenez is an active member of the Miami arts community. In 2004 she founded Artformz Alternative. She directed the artist run space, first in the Miami Design District and later in the Wynwood Arts District for seven years, leading collaborations, exhibits, international exchanges and projects with over 150 artists. Today she is primarily focused on her own studio practice, yet continues to develop selected curatorial projects. In 2013, she was elected to the National Board of ArtTable, Inc. and serves locally as the Florida Chapter Chair. This renowned nonprofit was founded in the 1980’s in NY, and maintains a mission to foster leadership amongst women of extraordinary promise in the visual arts professions.