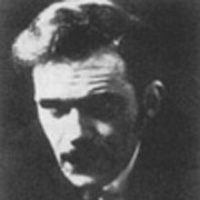 The creative, and radical sculptor Alexander Archipenko was born in Kiev, Ukraine, a grandson of an icon painter and a son of an engineer and inventor. After being expelled from the then conservative Kiev Art Academy, he traveled to develop his art, first to Moscow in 1906, then to the vanguard center of Paris in 1908, Nice during the War, Berlin with his first wife Angelica Schmitz in 1921 and finally to the United States in 1923. His Cubist sculpture, and explorations in negative volume received international recognition; and by founding art schools, exhibiting widely and publishing internationally Archipenko’s innovations in form, color, and materials spread internationally. He became a U.S. citizen in 1928 and taught in Chicago before establishing his own art school in Woodstock, New York.
The Ukrainian-American community recognized his stature by commissioning (more traditional) sculptures of national heroes, including the poet Taras Schewchenko, Vladimir the Great, Ivan Franko, and the poet Shashkewitch. The sculptor’s second wife, Frances Archipenko Gray, who generously lent six sculptures for exhibition in Kiev, is establishing the Alexander Archipenko Foundation at the site of his former school in Woodstock, New York.