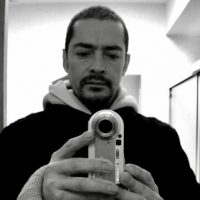 Using mediums like encaustic, lead, resin, and graphite, visual artist Alfonso Mena Pacheco’s artworks are similar in style to lyrical abstraction. His non-figurative paintings with colorful graphics and textures achieve a poetic expression; viewers can directly interact with the works, deciphering hidden signs and pictorial symbols in each composition. Pacheco metaphorically veils his paintings, allowing viewers “to glimpse the hidden material and a multiplicity of planes that are intertwined from their reflections.”

Pacheco graduated from La Esmeralda, Mexico City, and teaches at the National School of Plastic Arts, Mexico City, part of the National Autonomous University of Mexico. A member of the National System of Creators, he has received numerous honorable mentions, namely from the Rufino Tamayo Biennial at the Oaxaca Museum and the Rufino Tamayo Museum, both in Mexico, and the International Painting Biennial at the Museum of Modern Art, Ecuador. Pacheco won acquisition prizes in painting and drawing from the Palace of Fine Arts and the National Salon of Plastic Arts. The artist has been featured in Mexican magazine and newspaper publications such as Vertigo, Process, La Jornada, and Reforma. Pacheco has participated in over ninety solo and group exhibitions around Mexico, Europe, and the United States. His works are housed in the collections of the Aguascalientes Museum, Mexico; the Carrillo Gil Museum, Mexico City; the Museum of Modern Art, Mexico City; and the Cultural Heritage of the Ministry of Foreign Relations, Mexico City.